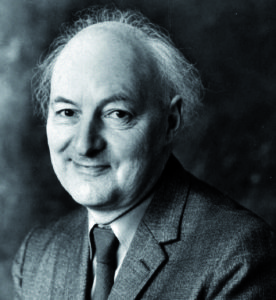 Dr. Douglas MacEwan was born in Edinburgh on June 20, 1917. He attended a private school where he joined a relatively high age (12 years old). At the age of 16 he entered the University of Edinburgh where he studied Physics and immediately completed his doctoral thesis in the field of X-ray crystallography with Dr Beevers. He developed a computer prototype (1940), which facilitated the calculation of the terms of Fourier series, both cosines and sines. In 1941 he entered the Macaulay Institute for Soil Research in Aberdeen. His work would consist of the analysis of the clay fraction of soils, by means of X-ray diffraction. He improved the cameras, with original vacuum systems and new beam catcher that allowed to collect the high spacing of the clays. He also invented techniques to improve the analysis of clay minerals, such as the technique of oriented aggregate to exalt basal reflections and the intercalation of polyalcoholes (ethylene glycol, glycerin) to solve the problem of basal spacing dependent on mineral hydration. This circumstance aroused in Douglas an interest in the formation of clay and organic matter complexes that still arouse interest today, in such diverse fields. At that time they began their friendship with Robert C. Mackenzie, and they were convinced of the need to create a scientific society that would integrate the growing group of interested parties in the study of clays.

MacEwan’s open spirit made him a polyglot, somewhat unusual in an English speaker, with solid knowledge of Latin, Spanish, French, German, Swedish, Slovenian and Danish. This facilitated contact with European scientists such as J. Mering and J.L. Martín Vivaldi. The mutual sympathy with the latter made it easier for him to join the Experimental Station of Zaidín in Granada in 1954 as a guest researcher at CSIC. He then began his first Spanish stage of three years and collaborations with the incipient group of Martín Vivaldi (Girela Vílchez and the chemistry student, Rodríguez Gallego), the direction of the doctoral thesis of Raussel Colom (Chemist) and Ruiz Amil (Physicist), and study of intercalation complexes in montmorillonite and graphite. During that stay he meets his wife Jean Hopley, marries and has his daughter Helen.

In 1957 he went to Dundee, for 5 years, to work as a professor in the Department of Physics at Queen´s College. At that time he supervised the doctorate of H.H. Sutherland and F. Aragón de la Cruz on organic complexes of vermiculite and graphite acid respectively. There his son Niel was born.

In 1962 he returns to Spain and remains part of the Experimental Station of Zaidín in Granada with the Martín Vivaldi group and in Madrid in the Department of Inorganic Chemistry of the Central University, with the Gutiérrez Ríos group. In Granada he began his work on the influence of the interlaminar cation on the hydration and solvation of Montmorillonite with Martín Vivaldi and Rodríguez Gallego.

In 1966 a real identity crisis began in Douglas. Very distressed by three major problems of humanity (population, resources and environment) he founded The Conservation Society that he directed for 20 years. In 1967 he finally broke with the scientific world and retired to Co Waterford in Ireland, and in an old 17th-century house of the Irish Reformed Church, he founded a small publishing house “Volturna Press” and dedicated to publishing short editions of books in languages Little spread. He also gives lectures on very varied topics of religion, conservationism and even parapsychology. As a good humanist everything about man was interested. Since 1975 he lived in Hythe, Kent, where he died on March 12, 2000.

The importance of his scientific work is manifested in the frequency that his works on the interstratified and the application of the Fourier transform are still cited for study.