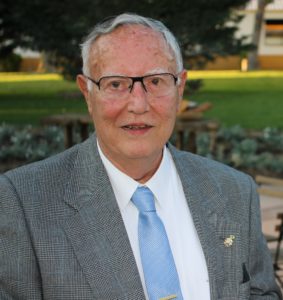 Dr. José Antonio Rausell-Colom was the pioneering clay mineralogist who carried out some of the earliest research on swelling and intercalation of 2:1 clays. During his long and productive career as research professor at CSIC, Professor Rausell-Colom gained praise and recognition as an authority in the field of physical-chemistry of clays. Early in his career, some of the best clay mineralogists in the international research community of the 20th century served as his mentors and collaborators. His doctoral research at the Complutense University of Madrid was supervised by Prof. J.L. Martín-Vivaldi and included a residency at Estación Experimental del Zaidín (EEZ-CSIC) in Granada, Spain, a crucible for decades of excellent research in clay mineralogy. In Granada, he worked under the direction of D.M.C. MacEwan, who had recently relocated from the Macaulay Institute in Scotland to Granada for stint in the late 1950s as a research professor. José Antonio’s dissertation on swelling of Na-montmorillonite was one the earliest studies of factors that control smectite hydration, and it led to post-doctoral research with Keith Norrish of CSIRO-Australia (1958-1962). Rausell-Colom and Norrish pursued new questions related to swelling of smectites, first developing protocols for studying the swelling of clay minerals by X-ray diffraction at low angles, and then by looking into origins of soil smectites by applying controlled laboratory reactions to simulate weathering of micas.

In 1963, José Antonio began a decades-long career at CSIC in Madrid, beginning at the Instituto de Química-Física Rocasolano working on crystallochemistry of phyllosilicates. By the early 1970s, he was ensconced as a Research Professor at the Instituto de Edafología y Biología Vegetal, and later (and longer) at the Instituto de Físico-Química Mineral, founded and directed by J.M. Serratosa, one of the laboratories further integrated in the new Instituto de Ciencia de Materiales de Madrid. His early work at CSIC involved intercalation of organic compounds (e.g. Rausell-Colom and Salvador, 1971, Complexes Vermiculite-Aminoacides, Clay Min 9, 139-149, published in French; and Rausell-Colom and Fornés, 1974, Monodimensional Fourier Analysis of Some Vermiculite-l-Ornithine Complexes, Am Min 59, 790-798). By the mid-to-late 1970s he had begun to explore processes that control transformations of 2:1 to 1:1 clays, including reaction of naturally-occurring vermiculite to chrysotile in a complex geological setting in Malawi (Mifsud et al., 1977, Am Min 62, 1225-1231). During that period he was supervisor of six PhD dissertations, all related to physical-chemical aspects of clay minerals. Along with José María Serratosa, Dr. Rausell-Colom contributed the chapter “Reactions of clays with organic substances” to a book that nearly all of us have used as a reference, Chemistry of Clays and Clay Minerals, edited by A.C.D. Newman (and published by the Mineralogical Society, London). Throughout the 1980s and into the 1990s, José Antonio expanded his research to methodologies for determining structures of organic compounds (e.g. Pérez et al., 1989, SAXD study of the monoclinic modification of poly[3,3-dimethyl oxetane], Makromol. Chem. 190, 613-621), and continued to explore structures and compositions of clay minerals (e.g. Rausell-Colom et al., 1991, Relationship between composition and d001 for chlorite, Am Min 76, 1373-1379). His career as a researcher spanned a wide range of topics in clay mineralogy and organic chemistry, and the articles recognized above are just a short selection of his work. He also hosted clay scientists (Charles Pons, Antonio Pozzuoli) in sabbatical stages in the 1980s.

In addition to his acclaimed career as researcher, professor and mentor, José Antonio is former president (1979-1984) and honorary member of the SEA in 1991 (Sociedad Española de Arcillas, the Spanish Clay Society) and he served on the Nomenclature Committee for AIPEA from 1975-1985. Dr. Rausell-Colom also served as Programme Director of the High Technology of the NATO Scientific Affairs (1989-1997) and he returned to the CSIC at the Laboratory of Nanotechnology until his retirement in 2010. He was honored in his home country of Spain with the Alonso de Herrera Award and the Encomienda de la Orden del Mérito Civil. He epitomized excellence in research and international collaboration, and was an esteemed colleague and mentor to many who will be missed greatly.