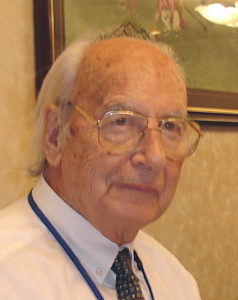 JOSE MARÍA SERRATOSA (1924-2012), has been one of the scientists who has given the greatest boost to both the Clays Science and the SEA. Linked to the CSIC from 1953 until practically his death, he developed a brilliant research activity at the Universities of Utrech, Illinois, Texas (in Austin) and Washington (in San Luis) until his return to Spain in 1968. Creator of the Institute of Materials Science de Madrid (ICMM), belonging to the CSIC, of which he was its first Director (1986-1990) and Honorary Director (1990-2012). Responsible for the National Mobilization Program for Research in Materials, this specialty gained an important boost in Spain. He highlighted his contribution in the application of IR and NMR spectroscopy in structural aspects of phyllosilicates and the interaction clay-organic compounds, receiving international recognition as “Fellow” of the AIPEA (2005) and “The Marilyn and Sturges W. Bailey Distinguished Member Award “, from the CMS (2010).