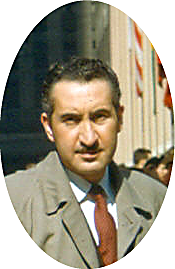 Juan Luis Martín Vivaldi (Granada 1918-Madrid 1974), graduated in Chemistry from the University of Granada in 1940, received his doctorate in the Complutense University of Madrid in 1949, under the direction of Prof. Enrique Gutiérrez Ríos. Between 1950 and 1951 he made a long stay in Maryland (USA), working with Dr. S.B. Hendricks, one of the pioneers in the physics-chemistry of clays. Upon his return, he joined the CSIC as a Scientific Collaborator, in the first competitive exams held for this position. In 1955 he was named Scientific Researcher, developing his research at the Estación Experimental del Zaidín in Granada, where he was Head of the Physics-Chemistry and Clays Mineralogy Section, and later Vice-Director. In 1962 he obtained the Chair of Crystallography and Mineralogy of the University of Granada and in 1968 he held the Chair of the Complutense University through a transfer contest. That same year he was appointed Chief of the Mineralogy Section of the Lucas Mallada Institute and Head of the Clay Mineralogy and Technology Section of the Department of Economic Geology, both of the CSIC, where he was a Research Professor and Deputy Director. He was also appointed Head of the Mineralogy Section of the National Museum of Natural Sciences of Madrid. In recent years he held numerous scientific positions at the international level.

He was one of the initiators and perhaps the most faithful follower of clay studies in Spain. That is why he revitalizes the Spanish Group of Clay Minerals (GEMA), created in 1959, and in Madrid in 1969 it becomes the Spanish Clay Society, from which its first President is elected. In 1972 he is General Secretary of the International Clay Conference, which is celebrated in Madrid.

His research work was reflected in more than a hundred publications ranging from physical-chemistry and clay rheology to mineralogy, geology, deposits and clay synthesis. Among his works, many of the ones I publish about bentonites, kaolins, sepiolite and palygosrkite, DRX or Thermal Analysis remain international references. In spite of the prematureness of his death he left a School with an almost fifty researchers, who continued their way of doing to achieve a “research of excellence”. His work methodology, meticulous, unhurried and with constant self-criticism, impacted his followers. On the other hand, his strong personality made him unforgettable for those who knew him. Finally, it is worth mentioning that, from his beginnings in the USA, he published numerous works in English, when in Spain it was quite rare, and influenced his disciples so that this would also be what is now “natural”.